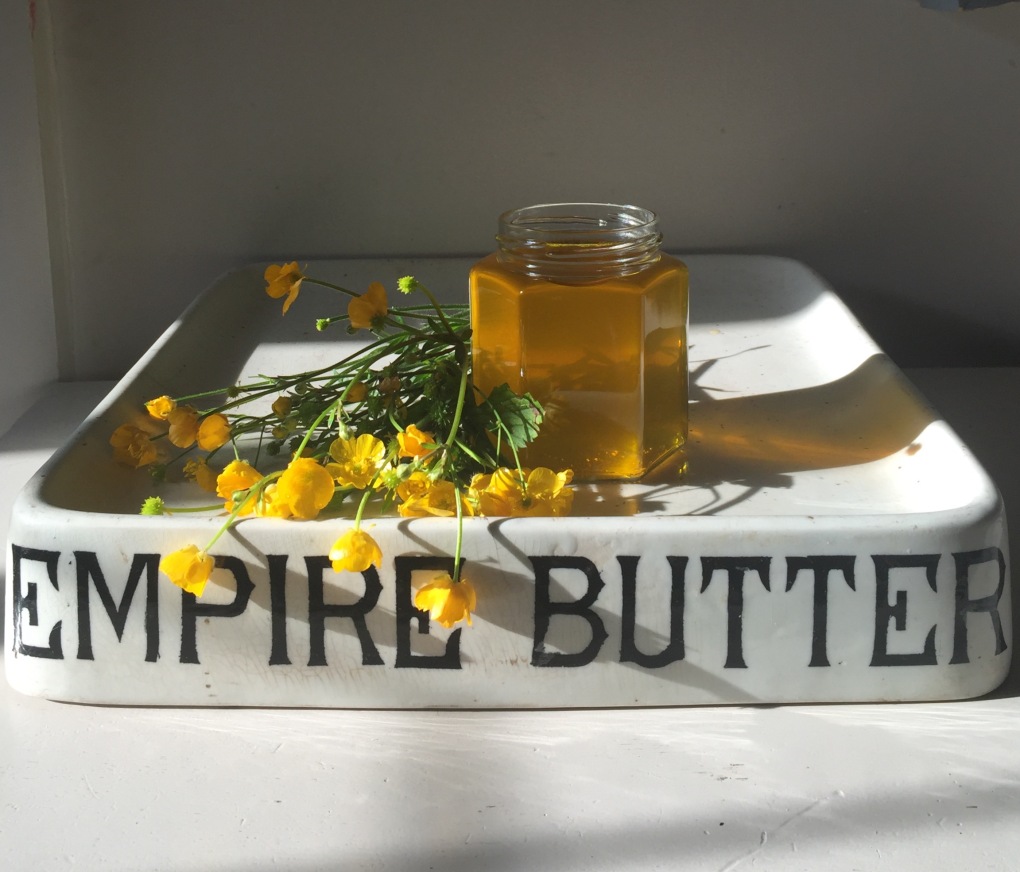 Walking with my Father in the countryside as a young child was always a complete joy, sometimes he would crouch down to my height pick a Buttercup and put it under my chin to see if I liked butter. The glow from the shiny petals would reflect a golden yellow light on my skin which would mean I did! Who doesn’t? Of course as a child, I thought this was pure magic in that wondrous way that children ‘believe’. Like when my Grandmother would make the snapdragons talk in the garden by squeezing their petals together and the many times I would gather rose petals with my sister to make potions, which only worked if you truly ‘believed’ in magic. These were wonderful rituals and traditions which I passed on to my own children when they were growing up.

Sadly, I also distinctly remember a time driving in a car and listening to the adults talk about how butter was dangerous and would block our arteries and cause heart attacks! I remember feeling frightened as I imagined my veins narrowing and furring up. It was such a strong image. The wheels of the low fat, high carb, processed food brigade was in full swing in the 1970’s. What has come to light however after decades of misinformation is that fat is not the problem where cardiovascular health is concerned. It is the highly processed, hydrogenated trans fats or ‘Franken fats’ that have taken their toll on the western world in the last 50 years.

Margerine was first created by a French chemist called Hippolyte Mege-Mourieres in 1869. He originally made it from beef fat and it was intended to be a less perishable and cheaper option to butter. As time went on vegetable oils like cottonseed and soya oils replaced the animal fat and by the first world war margarine was being made almost exclusively from these oils. At this time many people worried about this new fangled unwholesome product. However as time went on it became ever more popular because of it’s low price and long shelf life, plus the fact that butter was rationed during the Second World War due to regular supplies being cut off from New Zealand and Australia. The new age of processed food production took full advantage of post war Britain and America, where convenience and cheap food was in demand. The propaganda machine of the food industry also had us believe that Margerine was better for you than butter. Given the choice of a solid block of processed vegetable margarine for cooking or the pure golden hues of ghee to choose from, I know what I would choose.

Butter is a simple and natural food that doesn’t require any processing at all apart from shaking cream, you can even make it in your own kitchen if you wanted. It’s one of my earliest memories in kindergarten, taking it in turns to shake the jar of cream and being full of awe and wonder as it turned from a liquid into a solid. One of the ways my family like to consume butter is to clarify it and make Ghee. This is unsalted butter that has been gently simmered until the water evaporates, the butter fat separates from the milk solids making it both lactose free and casein free. As the butter cooks the milk solids either sink to the bottom of the pan or form a froth on the top which can be skimmed off filling your home with the most intoxicatingly wonderful smell and leaving you with liquid gold.

Ghee is a deeply revered and integral part of Indian cooking and is also highly prized in Ayurvedic medicine. As well as adding real depth of flavour to your food it also espouses a long list of health benefits. Known to support the body from the inside out Ghee is rich in vitamins and antioxidants such as Vitamin K. It is a fat which allows soluble nutrients to become easily assimilated by the body which makes it great for your skin, teeth hair and nails. It contains linoleic acid which is a fatty acid known to protect against carcinogens, diabetes and artery plaque. It is also rich in butyric acid which is a monounsaturated fatty acid that nourishes the cells of the intestine helping to reduce inflammatory conditions which in turn aids in the repair of the mucosal wall.

Robert Lustig a paediatric endocrinologist at the University of San Francisco and author of ‘Fat Chance’ wrote: “Food should confer wellness not illness. Real food does just that, including saturated fat. But when saturated fat got mixed up with the high sugar added to processed food in the second half of the 21st century it got a bad name.”

Ghee imparts a delicious slightly nutty flavour and can be spread on toast or drizzled on popcorn, best of all though, it has an extremely high smoke point making it a particularly good fat to cook with and makes fried eggs taste out of this world!  I like to make it every few weeks, it is a fantastic store cupboard essential and doesn’t need to be kept in the fridge. It is also a great deal cheaper than buying it ready made, especially if it is produced by a reputable company.

How to Make Ghee

Use the best unsalted butter you can find, preferably organic and grass fed.

4 thoughts on “Ghee is Golden”