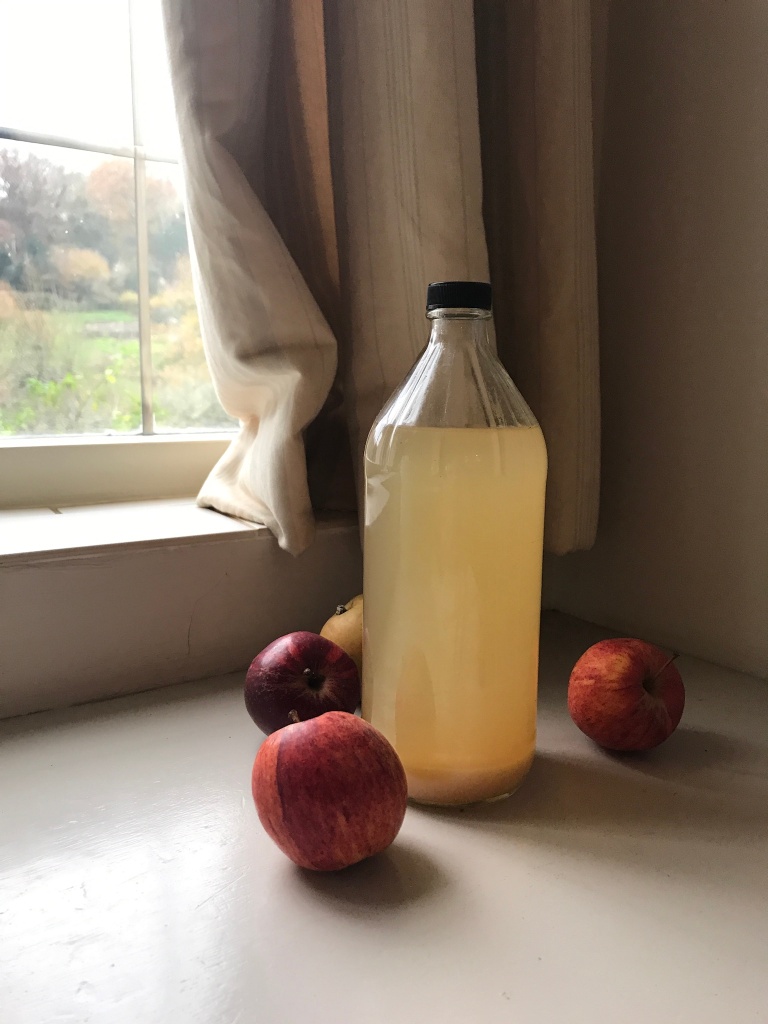 There is a very old apple tree in my garden, the last of an ancient orchard that was never replanted. When we bought the house we were told that it hadn’t produced any fruit for years but that despite this it gave a splendid show of blossom in the Spring. Our first winter arrived and with it came a freezing blizzard which blew in and settled it’s heavy icy snow crystals on all the trees. Many of them were felled that cold night by the sheer weight of the ice on their boughs. Our old apple tree lost two branches and I thought it would never recover. The next Spring true to form it flowered the most beautiful blossom, but when Autumn came around no apples appeared. As an experiment I planted two apple trees nearby hoping that when they flowered they would cross pollinate and give the tree some new life. To my amazement my plan worked and now several years later my tree is laden with juicy red apples.

They are sweet and crisp and good eaters but since I now have so many I am constantly thinking of new ways to use them. I have always wanted to make my own apple cider vinegar but imagined it would be a complicated and tricky business, however to the contrary I was stunned by how simple and easy it was. Making your own apple cider vinegar is not at all daunting and can be made with any apples you have lying around. I love the fact you only use the apple cores and peel which are the bits you usually throw away! All you need is a large glass jar and a bit of patience, economical and thrifty all round.

Something I make a lot of with the apple pulp is fruit leathers. You can find a delicious recipe by Gill Meller here. It really is a great feeling to use every scrap of apple with nothing wasted!

Apple cider vinegar (ACV) is a real health elixir, it is probably one of the items I would take to a dessert island as it is beneficial in so many ways. It can be used both internally and externally to great effect. If you suffer from psoriasis like I do it is an invaluable aid as it can be used very effectively as a natural anti-itch remedy, especially if you have an itchy dry scalp. You can also calm irritated skin if you bathe in diluted apple cider vinegar. To do this add 1-2 cups of ACV to a bath of warm water. It is helpful for so many conditions apart from Psoriasis, it will sooth painful sunburn and help it to heal faster. By soaking your nails or toe nails in a solution of ACV it can fight and clear up fungus. You can also improve your gut health and digestion by mixing a small amount of ACV in some water and adding honey to taste. Drink this first thing in the morning or before meals. I swear by drinking this concoction at the first hint of a sore throat or a cold. It works a treat! 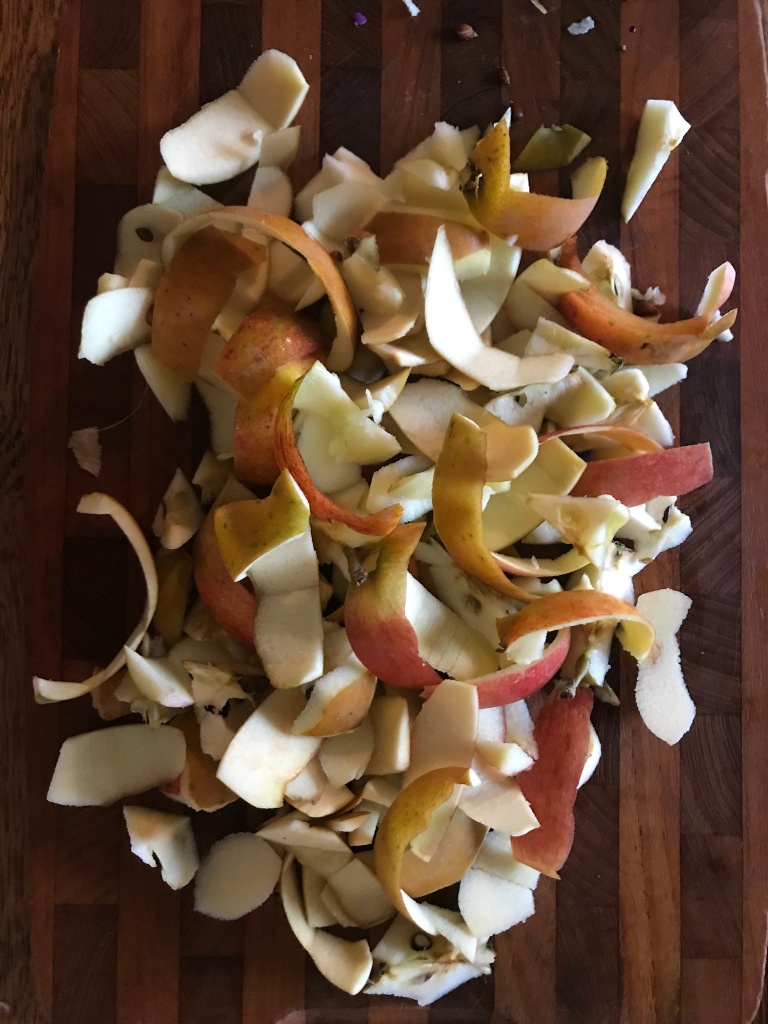 Cores and peels from 6-8 apples (preferably organic,  any colour will do)

Put the cores and apple peels into a wide mouth jar.

Stir in the sugar and then cover with a cloth securing it with a rubber band.

Leave it to sit at room temperature for 2 weeks giving it a stir from time to time.

Strain the liquid and discard the apple pieces. Put the liquid back in the jar and cover it again with a cloth or paper towel and rubber band.

Leave it for another 4 weeks stirring daily. Taste it from time to to time and if it has an acidity that you like transfer to a bottle with a lid. If not keep it for a while longer before bottling.

You can experiment by using honey or different varieties of apples to get different flavours.

The vinegar may grow its own ‘mother’ which is like a cloudy gelatinous film on the surface, if it doesn’t form on the surface it may look like stringy, cloudy strands throughout the vinegar. You can use  your ‘mother’ in your next batch to speed up the process.

Add 1-2 tablespoons when you are a making stock or bone broth it will help to draw out the minerals from the bones to make your broth even more nutritious. 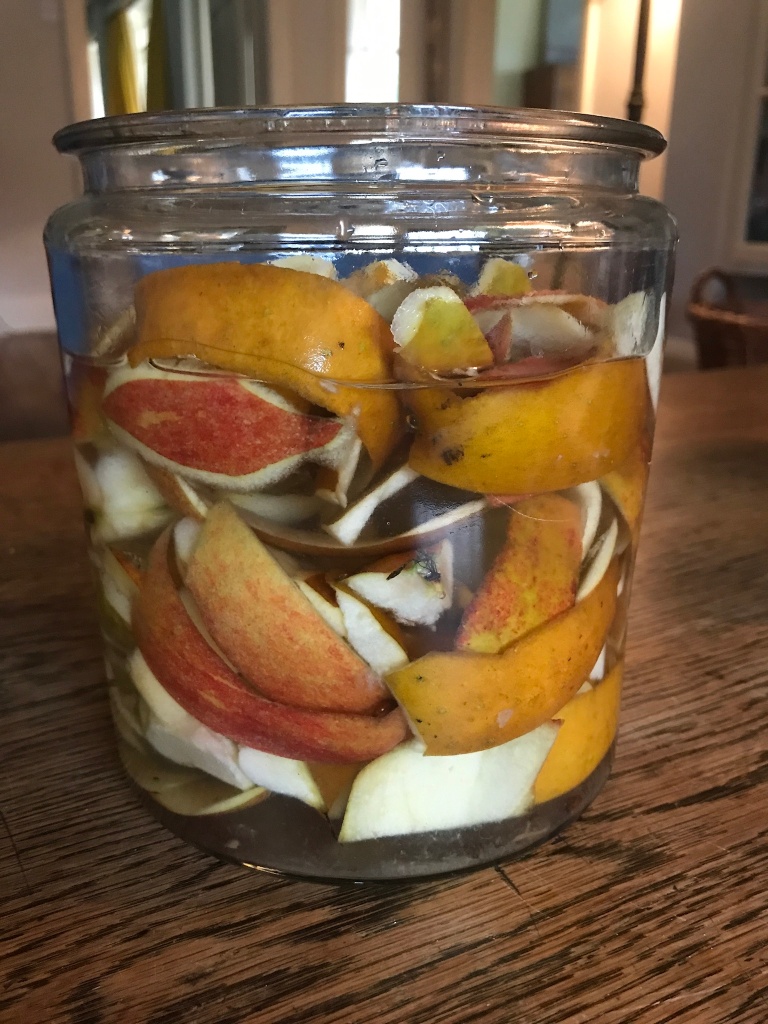